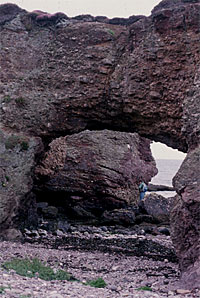 The arch at the southern end of Langness was formed relatively recently by the erosive power of the sea. However, of greater significance to geologists is the presence of an ancient land surface known as an unconformity.

The lower half of the arch is made up of Manx Group rocks formed around 480 million years ago while the upper half is a type of gravel deposited by flash floods in the Carboniferous period, around 350 million years ago. The uneven surface separating these two rock types is the unconformity and represents a gap in time of around 135 million years when no rocks have been preserved. The area was sub-sequently submerged below the sea leading to deposition of the Castletown Limestones on top of the gravel.

Unconformity at the Langness arch