If you walk 10 metres north from the car park at Niarbyl beach you can stand with each foot on different rocks derived from two separate continents. 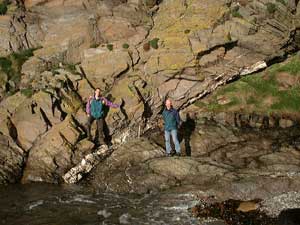 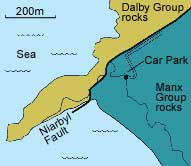 The rocks that form the coast south of Niarbyl are mostly dark grey mudstones (‘slates’) of the Manx Group. These are around 480 million years old and originate from Gondwana of which southern England and Africa are parts. The rocks north of Niarbyl are sandstones belonging to the Dalby Group which come from a northern continent known as Laurentia of which Scotland and North America are parts. The contact between these two groups of rock is a major geological fault representing the only remnant of the Iapetus Ocean which once separated these continents.