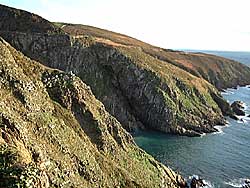 The cliff sections along Marine Drive show us what large parts of the Isle of Man would look like if all the vegetation and soil were stripped away. The exposed rocks, such as those shown in the photograph, are composed of hundreds of beds of sandstone and mudstone that have been tilted and folded by the effects of continental collision 410 million years ago. The sandstones are made up of sand grains cemented together to form a rock. However, the type of sand varies along Marine Drive, ranging from pure quartz (white beds known as quartzite) to a mixture of quartz, feldspar, small rock fragments and mica (brown-grey beds known as greywacke).