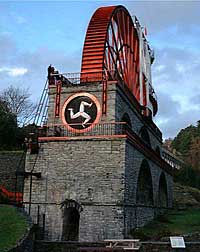 Perhaps the most obvious legacy of mining in the Isle of Man is the Great Laxey Wheel or ‘Lady Isabella’. Originally built in 1854, the wheel was used to pump water from the Laxey Mine in order to prevent flooding. The mine worked a vertical vein composed largely of quartz but also containing ores of lead, zinc and copper and reached a depth of over 650 metres.