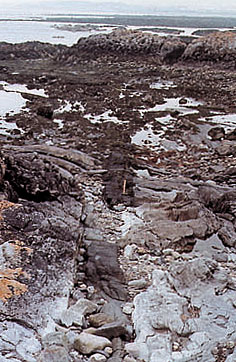 Tertiary dyke at Poyllvaaish (dark band of rock on which hammer rests).

65 million years ago, at the start of the Tertiary period, the Atlantic Ocean began to form when North America rifted apart from Europe.

Associated with this tectonic event, the continental plate beneath northern Britain was heated and cracked open along massive fractures allowing magma from beneath the crust to flow upwards. Nowadays, vertical sheets or dykes of basalt record this event representing where the magma cooled and solidified within the fractures.

Some of the dykes are over 100 kilometres long and extend more than 25km below the land surface.