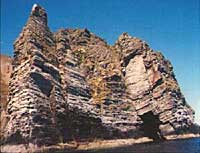 The Chasms have been exposed in recent times to the erosive power of the sea. The deep fissures are cracks developing in the cliffs where large sections are slowly slipping seaward, eventually to crash into the sea.

The cliffs at The Chasms are made up of many layers of sandstone originally deposited on the sea bed in water depths of several hundred to thousands of metres.

Each individual bed of sandstone is made up of quartz grains transported from shallower water by submarine avalanches (turbidity currents). As these slowed down they dumped the material they were carrying forming a new layer of sediment, in this case sand. The beds visible in this photograph represent a period of geological time in the order of 100,000 years. Areas containing thick quartz-rich sandstones (quartzites) similar to those at The Chasms are shown with yellow and orange colours on the accompanying Geological map. After 480 million years of burial, deformation and uplift.